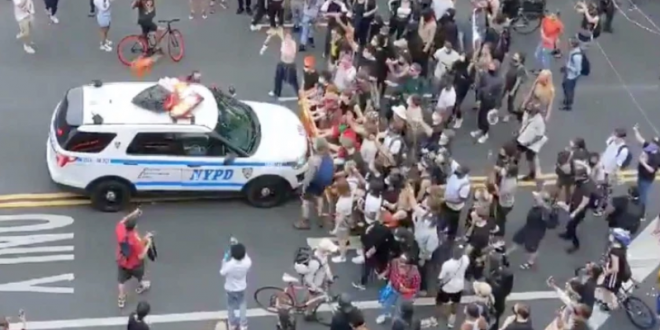 A large protest in Brooklyn on Saturday sent a shock through social media when video emerged of two New York Police Department vehicles driving through a group of protesters. The protest was one of dozens nationwide over the death of George Floyd.

The videos show dozens of protesters gathered in a street holding up a small barricade, appearing to stop an NYPD SUV from continuing to drive. A bag is seen to be thrown on the car as protesters throw objects at the vehicle.

Seconds later, a second NYPD vehicle approaches, and drives through part of the crowd, directly hitting at least half a dozen people. As it drove through, the initial vehicle hit the gas and rammed through the people who were standing in front of it, causing several people to collapse on the ground.

An NYPD spokesperson did not immediately comment on the clip or say if there were injuries caused by the incident.

Mayor de Blasio, speaking late Saturday on NY1, called the incident “troubling,” but added, “if those protesters had just gotten out of the way and not created an attempt to surround that vehicle, we would not be talking about this situation.”

The chilling clip caught the eye of Rep. Alexandria Ocasio-Cortez. The Queens-Bronx Democrat tweeted her outrage, calling for the cops behind the wheel to be “brought to justice.”

Oh my god. What is the @NYPDnews doing? pic.twitter.com/rZayr421pJ

@NYCMayor your comments tonight were unacceptable.

As mayor, this police department is under your leadership.

This moment demands leadership & accountability from each of us. Defending and making excuses for NYPD running SUVs into crowds was wrong.

BREAKING: #NYPD runs over protestors deliberately. They drive directly into the crowd.

This is attempted murder! pic.twitter.com/JhrJVYWl61