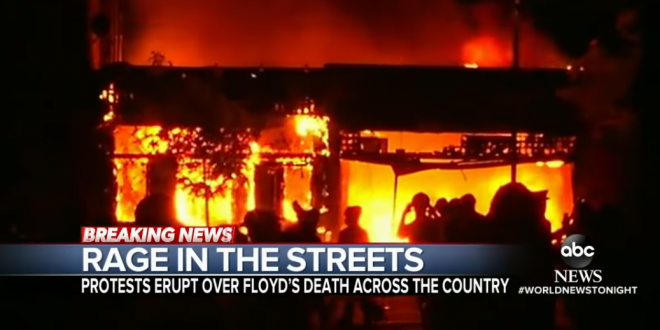 A largely peaceful day of protests descended into a night of chaos, destruction and sporadic violence overnight Saturday as tens of thousands of people poured into streets across the United States to express anger and heartbreak over the death of yet another black man at the hands of the police.

On Sunday morning, the authorities were still sorting through the smoldering wreckage as the vast scope of the unrest came into sharper focus. Squad cars had been set on fire in Philadelphia, stores were looted in Los Angeles, police officers in Richmond, Va., were injured and hospitalized, and at least one person was killed in Indianapolis.

As protests spread from coast to coast, mayors in more than two dozen cities declared curfews — the first time so many local leaders have simultaneously issued such orders in the face of civic unrest since 1968, after the assassination of the Rev. Dr. Martin Luther King Jr.