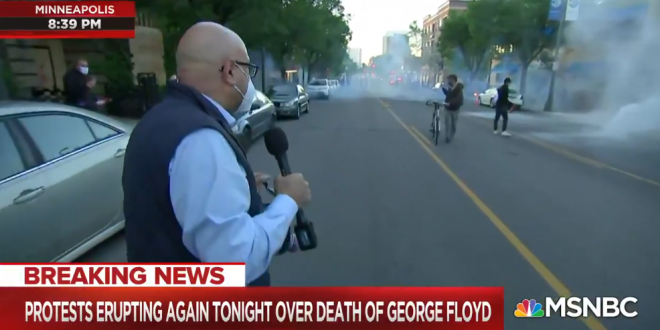 MSNBC’s Ali Velshi, CNN commentator Keith Boykin were among journalists recounting being hit by rubber bullets, attacked, and in some cases arrested while covering protests.

As tensions escalated across the United States during protests over the death of George Floyd, many journalists found themselves in the crosshairs of covering an unprecedented moment with some getting hit by rubber and pepper bullets.

MSNBC host Ali Velshi, who has been reporting live from Minneapolis, tweeted Saturday that he had been hit by rubber bullets “but I am fine,” he posted. “State police supported by National Guard fired unprovoked into an entirely peaceful rally.”

I’m hit in the leg by a rubber bullet but am fine. State Police supported by National guard fired unprovoked into an entirely peaceful rally

The media are exempted from the curfew. We were doing nothing wrong when we were fired upon

So here’s what happened today. The NYPD arrested me at 96th Street and West Side Highway while I was taking photos and video to post to Twitter. I told the police I was with the Press, they walked by me and then turned around and arrested me.

The police took my photo but they never read me my Miranda rights and never charged me with any serious crime. After 6 hours in police custody, they finally let me out of jail with a summons to appear in court.

The police have way too much power.

Just read the summons. I was charged with “walking on the highway” and “disorderly conduct – blocking vehicular traffic.”

Mind you, I didn’t block any traffic. The road was already obstructed by the police and the protesters. All I did was record it.

LAPD just shot me and protestors gathered at Beverly & Fairfax with rubber bullets. I was holding my press badge above my head. pic.twitter.com/9YCXq3rUvc

We are extremely alarmed that our reporter Chris Mathias (@letsgomathias) has apparently been taken into NYPD custody while doing his job as a journalist. We demand that he be released immediately. CC: @NYPDnews @NYCMayor @NewYorkStateAG

Thank you for bringing this to our attention. We’re looking into it.

Police in Minneapolis are firing on us (press) with rubber bullets. Our sound engineer John Marschitz was hit. He is ok. We were not standing within 500 feet of any protesters at the time, and we had credentials displayed and cameras out. #cbsnews pic.twitter.com/Ai6Qd8gLjz

WATCH: @AliVelshi reports from Minneapolis as police fire tear gas toward protesters: “There has been no provocation … The police pulled into this intersection unprovoked.” pic.twitter.com/OEUXdPg73O