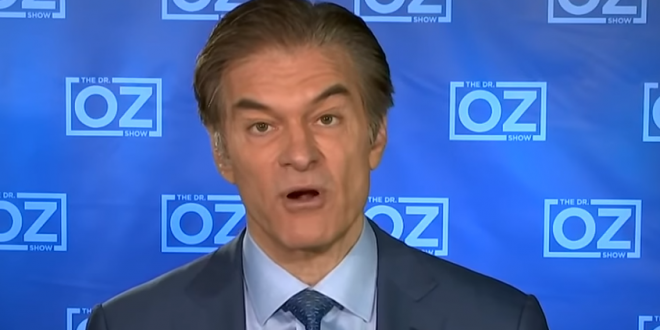 Dr. Oz: Opening Schools May “Only Cost 2-3% In Terms Of Total Mortality,” Some Would Consider That Tradeoff

Dr. Mehmet Oz was the subject of much ire online after appearing on “The Sean Hannity Show” to talk about the coronavirus and making some bold suggestions about how life can return to normal.  The doctor and TV star told host Sean Hannity that he thinks “schools are a very appetizing opportunity” in the efforts to allow us to get our “mojo back.”

“I just saw a nice piece in The Lancet arguing the opening of schools may only cost us 2-3%, in terms of total mortality,” explained Oz, referencing a percentage that suggests thousands could potentially die.

“Any, you know, any life is a life lost, but to get every child back into a school where they’re safely being educated, being fed, and making the most out of their lives, with the theoretical risk on the back side. That might be a tradeoff some folks would consider.”

Oz apparently means that the overall mortality rate would “only” go up by 2-3% if schools were reopened, not that 2-3% of people would die. Many people on Twitter are understandably hearing something else.

DR OZ: “Schools are a very appetizing opportunity. I just saw a nice piece in The Lancet arguing the opening of schools may only cost us 2 to 3%, in terms of total mortality. Any, you know, any life is a life lost, but … that might be a tradeoff some folks would consider.” 😳 pic.twitter.com/aifMeKTsIv

Did he just float the idea of killing children? Surely I misunderstood that.

Folks questioning Dr Oz’s credentials are missing the point. He has ALL THE FUCKING CREDENTIALS and STILL is okay with 2-3% of children in this country dying. That is the fucking problem. My dude is a board-certified, cardio surgery innovator and also trash.

Dr. Oz is a danger to public health. There’s no other way to put it.

OK, well, since this has now spread everywhere and Josh refuses to delete this tweet, I guess I’ll fucking go into it. What Dr. Oz is saying here is ghoulish…that overall mortality will increase 2 to 3% if kids go back to school. He is not saying that 2-3% of kids will die. https://t.co/yAvNpljD5H