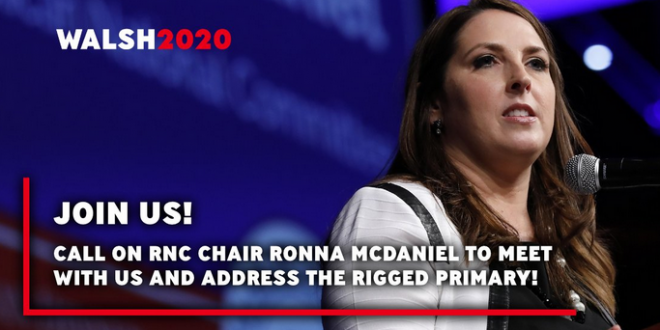 Joe Walsh To Protest At RNC HQ Over “Rigged Primary”

Join Team Walsh as we visit the Republican National Committee’s headquarters to protest RNC Chair Ronna Romney McDaniel’s refusal to meet with our campaign to discuss the cancellation of nearly twenty Republican primary contests in 2020. Chairwoman Ronna Romney McDaniel and senior RNC staff continue to refuse to meet with or take calls from Joe — so we’ll bring the meeting to them!

It is unconscionable the Republican Party would be limiting the voices of voters at a time when the President continues to become embroiled in scandal after scandal. We hope Ronna and others on the RNC staff, many of whom members our team used to work hand-in-hand with, will come to their senses and show common decency not only to Congressman Walsh, but by extension, to the American public.

Trump and the RNC are rigging this election!

So tomorrow morning — joined by our grassroots supporters — I’ll be visiting the RNC headquarters to hold @GOPChairwoman accountable for this repulsive affront to the voters and our democracy. Join us! https://t.co/6R34IkKrcQ pic.twitter.com/zOxjY4Choc