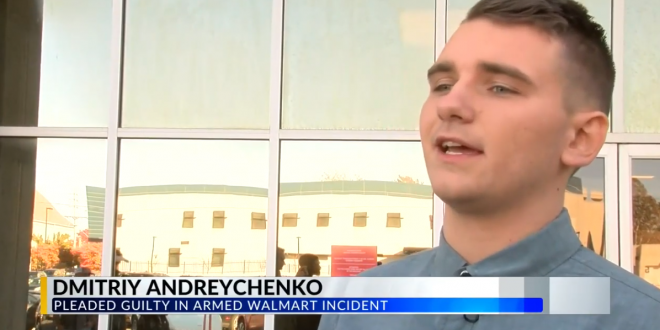 A judge sentenced him to a 180 day suspended jail sentence, two years of probation, with special conditions requiring him to serve 48 hours shock incarceration in the county jail, receive firearms training, and participate in a victim-offender dialog, a restorative justice measure, and any community service established through the restorative justice proceeding.

Police arrested Andreychenko on August 8 after walking into a Springfield Walmart Neighborhood Market in fatigues, openly carrying a tactical rifle, armed with a handgun and at least 100 rounds of ammunition. A former firefighter held him at gunpoint until officers arrived.

Police arrested Andreychenko on Aug. 8 after he filmed himself walking through the store with the weapons, prompting shoppers and employees to leave. The incident came just days after 22 people were killed during an attack at another Walmart in El Paso, Texas. An off-duty firefighter held Andreychenko at gunpoint until officers arrived. His attorney, Dee Wampler, said in a statement released Friday in advance of the plea that Andreychenko is a strong supporter of the Second Amendment.

Prosecutors said Andreychenko didn’t intend to carry out a shooting but was conducting what he called a “social experiment” in the wake of the Texas shooting and another mass shooting in Dayton, Ohio. Andreychenko had researched both shootings and saved the alleged manifesto of the El Paso shooter on his phone. On the day before the shooting, he posted a picture to Snapchat of a family member wearing his body armor looking down the sights of a rifle with the caption, “Watch out Walmart.”

His lawyers told the court today that he is a “good Christian family man.” Because that’s important. Shock incarceration is a form of “scared straight” programs which sometimes includes boot camp-style treatment in a local jail.