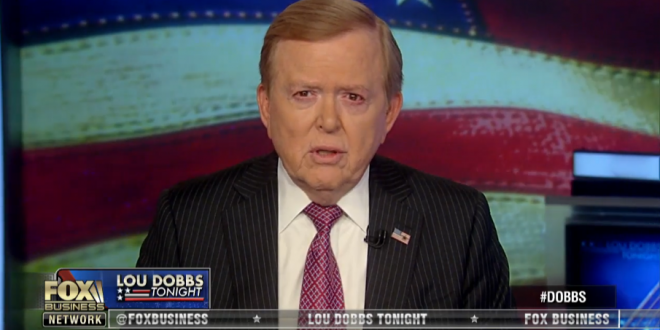 Fox Business host Lou Dobbs signed off his Friday show wishing viewers a “great weekend” and followed up that salutation with a rapturous encomium for President Donald Trump, whom he duly credited with “making such a thing possible for us all.” The Fox Business host has become one of Trump most devoted worshippers, warning that “traitors” to the president were “committing absolute suicide,” condemning Democrats — “to hell with them” — who have refused with him, and cursing as “damned idiots” any of the president’s disciples who don’t demonstrate sufficient faith in his agenda.

have a great weekend. the president makes such a thing possible for us all pic.twitter.com/KBaOZ2VPxB

Previous CALIFORNIA: Anti-Vax Protester Throws Menstrual Blood On State Senators, “This Is For The Dead Babies”
Next NASCAR Rejects Gun Ads For Its Souvenir Programs