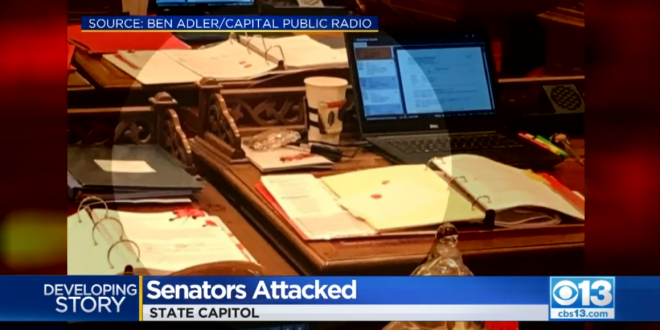 CALIFORNIA: Anti-Vax Protester Throws Menstrual Blood On State Senators, “This Is For The Dead Babies”

The California Senate was forced from its chamber and halted work for more than three hours on the final day of its session after an opponent of mandatory childhood vaccinations poured what appeared to be blood on lawmakers from the gallery Friday evening. Stunned lawmakers left the chamber and security officers cleared the gallery and floor after the 5:14 p.m. incident.

The California Highway Patrol said it arrested a woman who “threw a feminine hygiene device containing what appeared to be blood onto the Senate floor.” The agency said the liquid landed on several senators. “That’s for the dead babies,” the woman shouted as she threw the liquid from the balcony overlooking the Senate floor.

A video posted on Periscope showed a woman dressed all in black, repeatedly saying dead babies’ “blood is on your hands” as she was surrounded in a Capitol hallway by CHP officers. She was eventually handcuffed and led away. The CHP identified her as Rebecca Dalelio, 43.

🎉Happy last day of the California Legislature’s session!#Anti-vaccine protesters are *still* outside @GavinNewsom’s office. And lawmakers have dozens of bills left on tap.

California Senate goes into recess after anti-vaccine protester throws a red liquid from the gallery.

Protester blurted something about the blood of “babies.” Senators seem unnerved as they leave floor. @sfchronicle #SB276 pic.twitter.com/xZgNQbObqI

After the incident, anti-vaccine protesters in the Senate balcony raised their fists in the air. @sfchronicle pic.twitter.com/EoLJlmDLvR

It was a menstrual cup and blood. This is *madness*. After two days of chaining themselves to doors, committing assault two weeks ago, and mailing bricks through the campaign they’re tossing *blood* at Senators. https://t.co/Jm65bXWmbM

NEWS: Woman from Santa Cruz area identified as the person arrested in California after throwing what “appeared to be blood” onto lawmakershttps://t.co/egDnCcCbFX

“My blood is on the floor of the senate.” She admits to throwing her blood on. senators because of vaccines.” #StopAntiVaxViolence https://t.co/uLDVct1kPG

Previous CHATTER AWAY: Overnight Open Thread
Next Lou Dobbs Signs Off Show By Wishing Everyone The “Great Weekend Made Possible” By Glorious Leader