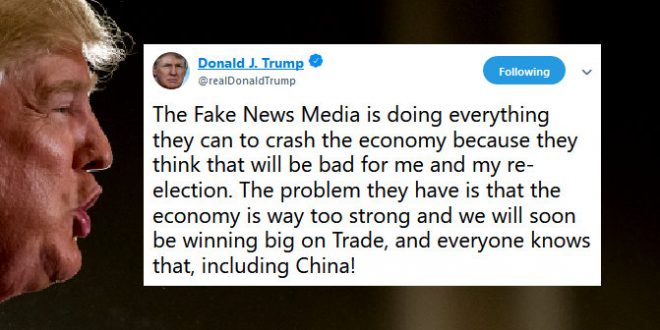 The Dow closed Wednesday adding another record drop under the president, but Donald Trump is blaming the media for the failures. Trump spent the better part of his first two years in office bragging that the market’s success was all because of him

“The stock market has added more than $8 trillion in new wealth,” Trump said during a Senate Republican Member Conference in 2018. Now that the market is going down, however, it has nothing to do with him. He’s blamed the Federal Reserve, Democrats, and now he’s turning to the media.

The Fake News Media is doing everything they can to crash the economy because they think that will be bad for me and my re-election. The problem they have is that the economy is way too strong and we will soon be winning big on Trade, and everyone knows that, including China!

I crunched the numbers and I don’t think it is CNN, MSNBC, or The New York Times fault the economy is predicted to crash.

Based on my calculations it’s because you are a dumbfuck who has never been successful at anything.