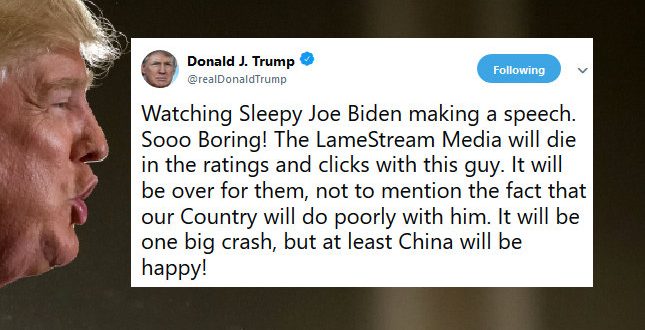 President Trump on Wednesday bashed media coverage of a speech from former Vice President Joe Biden as he flew from Dayton, Ohio to El Paso, Texas, between meetings with first responders and survivors of the weekend’s mass shootings.

Trump’s tweet came as all three major cable networks carried Biden’s speech in which the presidential candidate decried the president’s lack of moral leadership and accused him of fanning “the flames of white supremacy.”

Watching Sleepy Joe Biden making a speech. Sooo Boring! The LameStream Media will die in the ratings and clicks with this guy. It will be over for them, not to mention the fact that our Country will do poorly with him. It will be one big crash, but at least China will be happy!