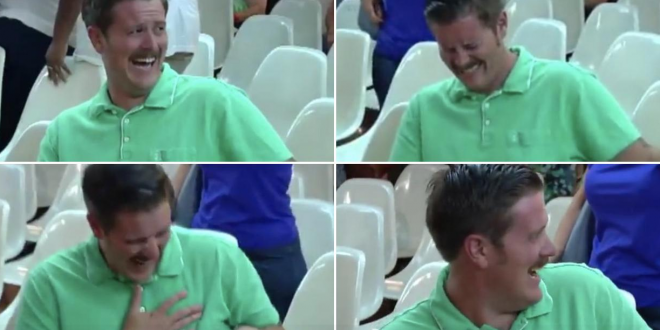 A man went viral as #GreenShirtGuy on Wednesday after a video showed him hysterically laughing at a pair of Trump supporters circulated widely online. The video has been shared thousands of times, with hundreds of users sharing the hashtag #GreenShirtGuy.

The incident — and the man’s viral fame — began with a protest of an Arizona city’s sanctuary city resolution.

The Tuscon City Council voted Tuesday night to put a sanctuary city measure on the November ballot, prompting outcry from two people, one of them a woman wearing a red “Make America Great Again” (MAGA) hat, according to video of the incident.

Scene inside a Tucson City Council Meeting. Officials voted to put a “Sanctuary City” measure on the November ballot pic.twitter.com/mEh4PNj0Wo

The fact that #GreenShirtGuy is No.1 trending gives me hope for humanity. pic.twitter.com/aGegKw19pi