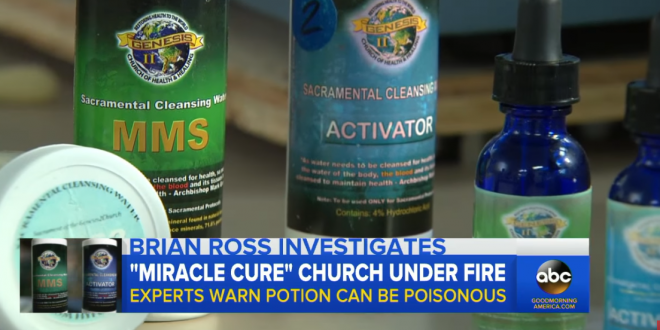 Via press release from the FDA:

The U.S. Food and Drug Administration is warning consumers not to purchase or drink a product sold online as a medical treatment due to a recent rise in reported health issues. Since 2010, the FDA has warnedExternal Link Disclaimer consumers about the dangers of Miracle or Master Mineral Solution, Miracle Mineral Supplement, MMS, Chlorine Dioxide (CD) Protocol,  and other similar products.

Miracle Mineral Solution has not been approved by the FDA for any use, but these products continue to be promoted on social media as a remedy for treating autism, cancer, HIV/AIDS, hepatitis and flu, among other conditions. However, the solution, when mixed, develops into a dangerous bleach which has caused serious and potentially life-threatening side effects.

The FDA recently received new reports of people experiencing severe vomiting, severe diarrhea, life-threatening low blood pressure caused by dehydration and acute liver failure after drinking these products. The FDA is not aware of any scientific evidence supporting the safety or effectiveness of MMS products, despite claims that the solution is an antimicrobial, antiviral and antibacterial.

The Genesis II Church of Health and Healing believes that MMS, which is essentially industrial bleach, is a religious sacrament. The church excommunicated an Eyewitness News producer after she went undercover armed with her iPhone at a seminar in Costa Mesa.

Their founder, Jim Humble, is a former Scientologist who claims he’s a billion-year-old god from the Andromeda galaxy. “And then I asked to be put in the part of the space navy that watched over Earth,” Humble, the self-proclaimed Archbishop of the Genesis II Church of Health and Healing claims in a video.

Humble also claims he discovered the miracle potion in the jungles of South America. “I just treated 800 cases of HIV just recently in Africa, every one of them came out good,” Humble is heard stating in another video.

The clip below is also from 2016. The church reportedly ships millions of units all over the world.