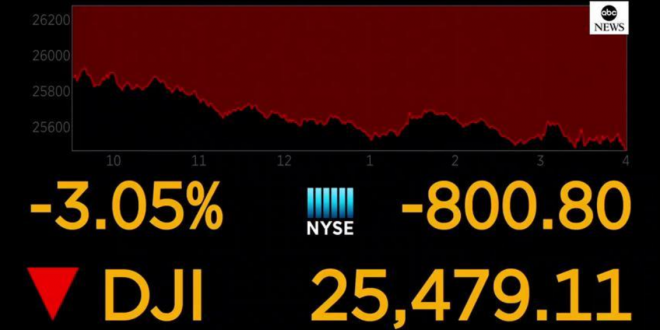 As financial markets tumbled Wednesday over concerns about international trade, President Donald Trump took to Twitter to defend his administration’s tariff war with China and to take his latest swipe at the nation’s central bank.

“We are winning, big time, against China,” Trump wrote on Twitter, despite few signs of progress in negotiating a new trade agreement with Beijing. “Prices to us have not gone up, and in some cases, have come down.”

The president’s remarks, which he made during his August break in Bedminster, N.J., came as markets fell sharply for the second time this week. The Dow Jones Industrial Average had lost 800 points, or 3.05% when the closing bell rang.

“So far, you’ve had Tariffs imposed on 300 Billion Dollars worth of Chinese products, but you can’t tell me that it has hurt our economy…& it really hasn’t led to any kind of serious rise in prices at the consumer level.” @Varneyco @FoxBusiness And we are taking in $Billions!

The Great Charles Payne @cvpayne correctly stated that Fed Chair Jay Powell made TWO enormous mistakes. 1. When he said “mid cycle adjustment.” 2. We’re data dependent. “He did not do the right thing.” I agree (to put it mildly!). @Varneyco

We are winning, big time, against China. Companies & jobs are fleeing. Prices to us have not gone up, and in some cases, have come down. China is not our problem, though Hong Kong is not helping. Our problem is with the Fed. Raised too much & too fast. Now too slow to cut….

..Spread is way too much as other countries say THANK YOU to clueless Jay Powell and the Federal Reserve. Germany, and many others, are playing the game! CRAZY INVERTED YIELD CURVE! We should easily be reaping big Rewards & Gains, but the Fed is holding us back. We will Win!

Fears of a global recession, delayed tariffs on Chinese goods, failure of massive tax cuts to deliver as advertised, a growing deficit. Pres. Trump’s image may have been honed by “reality television.” But his chaotic and capricious economic record cannot escape the real reality.