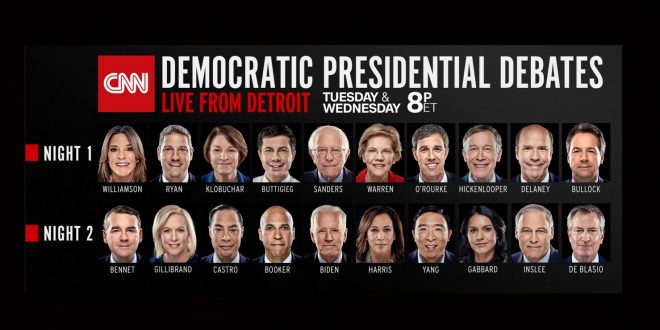 The second debate of the Democratic primary has higher stakes for a historically large field of more than 20 candidates, 10 of whom will face off each night. For several candidates, the debates will likely offer a last chance to be considered a serious contender for the party’s nomination.

Tougher rules set by the Democratic National Committee are expected to winnow the race. To qualify for the next debates in September, candidates must raise money from more donors and hit higher polling thresholds — a bar more than half of the candidates are at risk of missing.

“Everything’s at stake,” said Jill Alper, a Democratic strategist who has worked on seven presidential campaigns. She had simple and direct advice for the White House hopefuls confronting questions about Trump: “protest and pivot” — and “pivot quickly” — to what they can offer American families.

The stage is set for CNN’s Presidential Debates in Detroit. Tune in Tomorrow, Tuesday July 30th and Wednesday, July 31st at 8pmET.#DemDebate pic.twitter.com/jLwwVh7U17