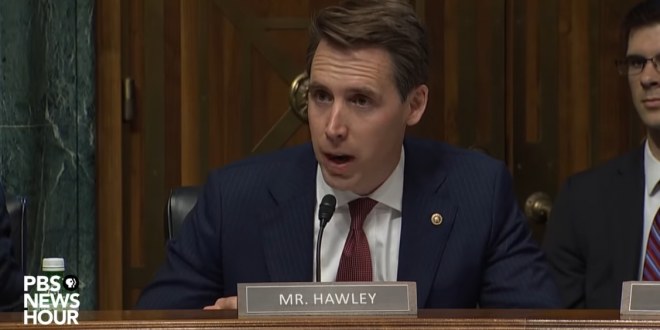 Sen. Josh Hawley (R-Mo.), a freshman who has emerged as a top Republican critic of major technology companies in Congress, on Tuesday will introduce a bill banning social media companies from building “addictive” features into their products.

Hawley’s Social Media Addiction Reduction Technology (SMART) Act would make it illegal for social media platforms to hook users by offering them more content than they requested in order to get them to continue on their respective platforms.

For example, it would ban YouTube’s “autoplay” feature, which loads up new videos for users automatically; Facebook and Twitter’s “infinite scroll,” which allows users to continue scrolling through their homepages without limit; and Snapchat’s “streaks,” which reward users for continuing to send photos to their friends.

Hawley first appeared on JMG when as Missouri Attorney General he offered to host Trump’s longed-for military parade. He was quickly smacked down by state officials who said he had no authority to make such an offer.

Sen. Josh Hawley has emerged as a relentless adversary of the tech industry, even safeguarding his own young sons from Silicon Valley’s social media pic.twitter.com/sR91jQq0jY