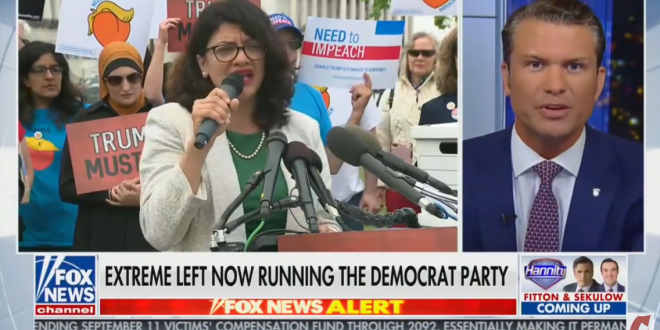 Appearing on Fox News’ Hannity alongside contributor Tammy Bruce, Hegseth blasted the so-called Squad for being too critical of President Trump. After Bruce alleged that the 2020 Democratic presidential candidates were all taking their cues from the group of freshman lawmakers, host Sean Hannity asked Hegseth about their “radical” and “extreme” views.

“I don’t think that’s going to fly,” the host added. “No, it exposed the real agenda of today’s modern left,” the pro-Trump Hegseth said. “I mean, if you look at how Rashida Tlaib talked about President Trump having a hate agenda, I could, therefore, look at her and said that she has a Hamas agenda.”