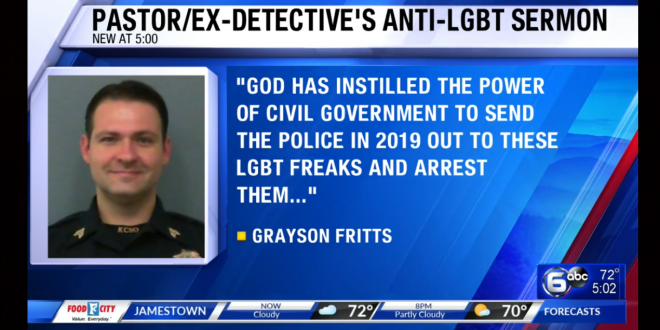 TENNESSEE: Sheriff’s Deputy On Leave After Sermon Calling For Police To Execute LGBT People For Jesus

Knox County Sheriff’s Office deputy and pastor of All Scripture Baptist Church Grayson Fritts went on the defensive Wednesday night following the delivery of a sermon on June 2, 2019, calling on police to enforce a bible passage that prescribes death as punishment for being a member of the LGBTQ+ community. The sermon prompted an investigation by the Knox County District Attorney’s Office.

“The purpose of this sermon is, our government, like the police, should enforce Leviticus 20:13,” Fritts said during a service at All Scripture Baptist Church during a sermon titled “Sodomite Reprobates.” Fritts made several violent statements in his sermon, calling non-straight people “freaks, animals” and other names. He expressed the belief that it is the duty of police and the government to enforce anti-LGBTQ+ laws that are outlined in the Bible.

Two weeks ago Fritts requested to take part in a “voluntary buy-out” and he is currently on paid sick leave. The sheriff’s office say it is reviewing his pending cases for potential bias. Hit the link for MUCH more from his sermon.