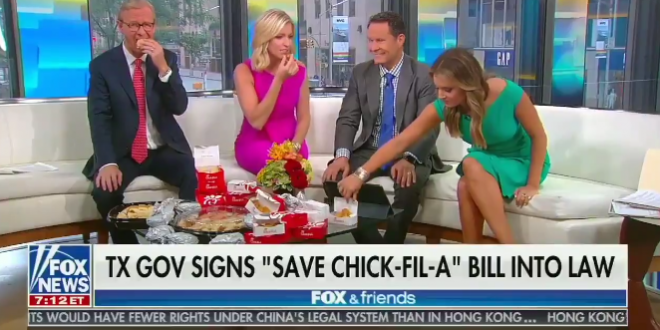 A new piece of legislation signed by the governor of Texas claims to advance religious freedom, but according to critics, it will actually enshrine the ability to discriminate against the marginalized LGBTQ community into law.

The hosts of “Fox & Friends,” President Donald Trump’s favorite morning show, also showered praise on Greg Abbott’s decision to sign the bill into law as they ate from a buffet of Chick-fil-A food. “The bill is to protect private entities from punishment over actions they take due to their religious beliefs,” Steve Doocy said.

Ainsley Earheart, his co-host, added, “So San Antonio airport —  Chick-fil-A wants to move in there. Well, the area lawmakers — the local lawmakers said no, because there is some controversy with this restaurant. Whether or not — what their beliefs are on LGBT — and so they voted, ‘No.’ Well, it went all the way to the governor’s desk, and he just signed it.”

Fox & Friends discusses Texas’ new “Save Chick-fil-A” law while eating a large pile of Chick-fil-A food, and warning opponents of its anti-LGBTQ practices that “every time you try to stop Chick-fil-A, you help Chick-fil-A.” pic.twitter.com/j6NIlWPqaz

Previous TENNESSEE: Sheriff’s Deputy On Leave After Sermon Calling For Police To Execute LGBT People For Jesus
Next Justin Amash On Challenging Trump In 2020: I Have No Interest In Playing Spoiler, If I Run, I’m Running To Win