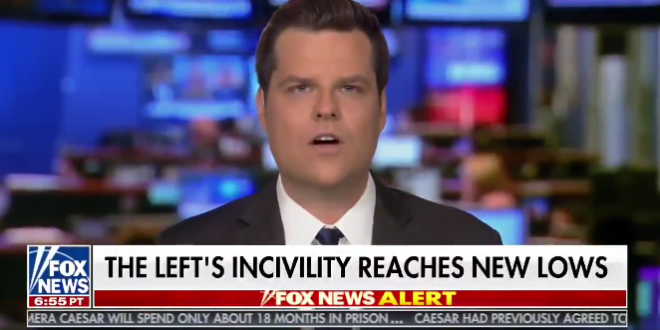 Rep. Matt Gaetz (R-Fla.) said this week that he plans to press charges against the person who threw a drink at him earlier this month as he was leaving a town hall event.

“If there are no consequences, then maybe it’s me getting hit with a drink one time, but what if it’s a member of my staff what if instead of a drink it’s acid or urine?” he said.

Gaetz tweeted Thursday that he was pressing charges to “send a message that we as conservatives have a right to our views — just like anybody else.”

I had a circumstance just a few weeks ago where someone threw a drink at me leaving a town hall meeting. I am going to press charges. It’s really important to send a message that we as conservatives have a right to our views — just like anybody else. We’re not backing down. pic.twitter.com/gCk05s9dWK