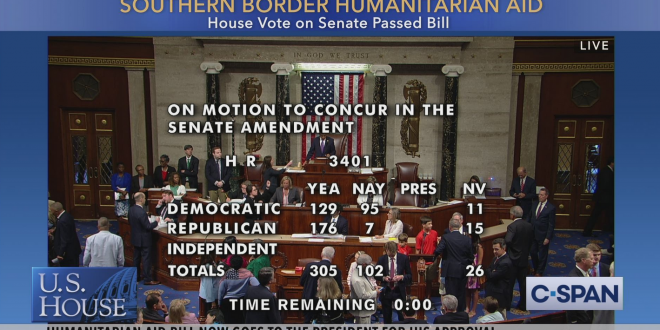 House Speaker Nancy Pelosi said she is “reluctantly” urging Democrats to pass a bipartisan emergency spending bill Thursday afternoon to send humanitarian relief to the southern border, reversing course and abandoning a Democratic effort to amend a measure that won strong bipartisan support in the Senate on Wednesday.

“The children come first. At the end of the day, we have to make sure that the resources needed to protect the children are available,” Pelosi wrote in a “Dear Colleague” letter Thursday afternoon.

“Therefore, we will not engage in the same disrespectful behavior that the Senate did in ignoring our priorities. In order to get resources to the children fastest, we will reluctantly pass the Senate bill.”

“We didn’t even bother to negotiate… we’re immediately going to just saying yes to what got passed out of the Senate,” says Rep. @AOC on Pelosi’s decision to pass the Senate border funding bill.
“We are a House majority and we need to act like it.” https://t.co/kBegQJcVo4 pic.twitter.com/dW8Fkdoxjc

This Senate Bill will have us write a $4.6 Billion blank check (incl military $) for the border w NO accountability – just a verbal pinky promise.

Trump is not to be trusted with protecting our immigrants. Why must that even be stated? We need hard lines of protection, in ink. https://t.co/xFci23pFo6