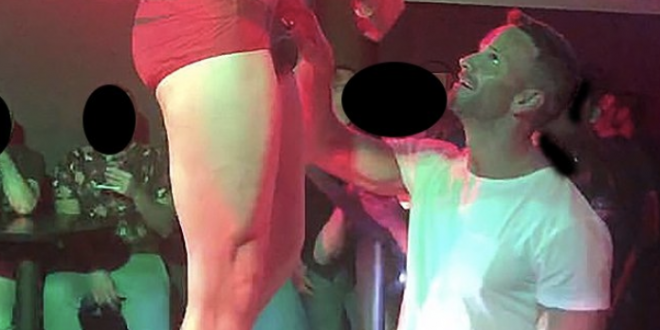 From the British tabloid Daily Mail:

Former Republican congressman Aaron Schock was filmed slipping cash into a go-go dancer’s tiny briefs in a gay bar in Mexico City, DailyMailTV can reveal. Schock, 38, was caught on camera dancing in Boy Bar, an LGBT dive bar in the area of Zona Rosa, which is the city’s Red Light District, on Saturday around midnight.

The disgraced former Illinois congressman, who was forced to resign in 2015 after being accused of funding lavish trips with taxpayer money, watched as the muscly dancer, who wore just briefs, sneakers and socks, cavorted on stage. Schock slipped the bill into the hunk’s briefs before clasping his hand in a show of appreciation.

Hit the link for the video and many pics.

“Hey Cutie, I’m Aaron Schock. As a congressman I voted against marriage equality, the repeal of ‘Don’t Ask, Don’t Tell’ and Equal Protections for LGBT folk. Now hold still while I shove this dollar down your shorts.” pic.twitter.com/YLGDXrW9Ei