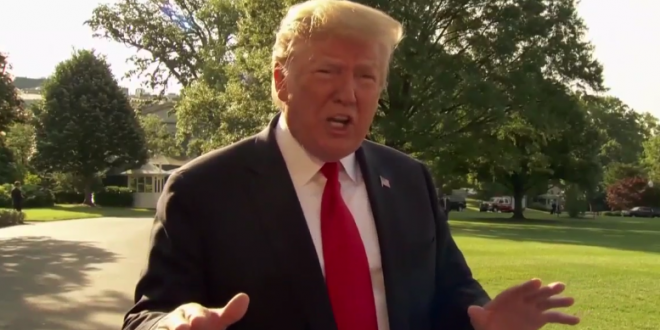 “I wasn’t involved. I would not have done that. I was very angry with John McCain because he killed health care. I was not a big fan of John McCain in any way, shape or form. I think John McCain had a lot to getting President Bush, a lot to do with it, to go into the Middle East which was a catastrophe.

“To me John McCain, I wasn’t a fan. But I would never do a thing like that. Now, somebody did it because they thought I didn’t like him. Okay? And they were well-meaning. I didn’t know anything about it. I would never have done that.” – This morning’s word salad from Glorious Leader.

JUST IN: On USS John S. McCain incident, President Trump reiterates that he wasn’t a fan of the late John McCain, but he wasn’t involved and “would not have done that” — though “somebody did it because they thought I didn’t like [McCain]. OK? They were well-meaning, I will say.” pic.twitter.com/rrtYpYq3FD

WATCH: After tweeting this morning that “I had nothing to do with Russia helping me to get elected,” President Trump tells reporters that “No, Russia did not help me get elected. You know who got me elected? I got me elected. Russia didn’t help me at all.” pic.twitter.com/7IFOx96Sdd