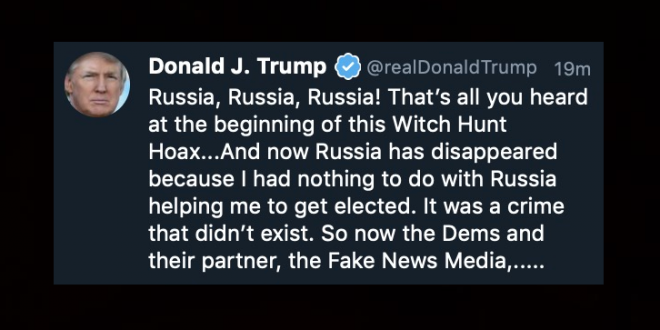 Evidenced by his Twitter feed, President Donald Trump woke up Thursday morning with Special Counsel Robert Mueller — and his stunning nine-minute press conference — very much on his mind. In a remarkable development, however, it appears that Trump is publicly admitting, for the first time at least, that Russia interference helped get him elected president, as has been stated repeatedly by numerous U.S. intel and Justice Department investigations, including the office of Special Counsel. That is until he deleted the tweet.

“I had nothing to do with Russia helping me get elected.”

So here you finally admit that “Russia helped me get elected.” Well, that’s what the investigation was about. The investigation found plenty of evidence that Russia did just that. It thus wasn’t a “Witch Hunt” or “Hoax.” So why did you repeatedly try to obstruct it? pic.twitter.com/XhCeO1iblt

Previous Hannity: “Full Of Crap” Mueller Doesn’t Know The Law
Next Trump Claims No Involvement In USS McCain Incident But Says Whoever Did It Was “Well-Meaning” [VIDEO]