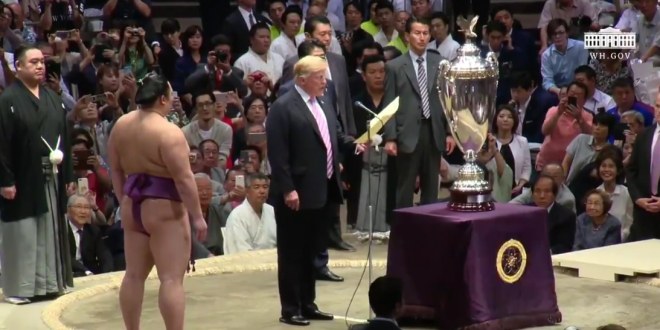 On one side of the sumo ring stood a tall, hefty man with an unconventional hairstyle, bowing and smiling as the crowd applauded; opposite Donald Trump stood a professional wrestler, who on Sunday became the first recipient of a winner’s trophy awarded by the US president during his state visit to Japan.

Trump had been spared the agony of watching the last five bouts of the 15-day tournament in the customary manner – seated cross-legged on a thin cushion. Instead, sumo authorities broke with tradition and provided near-ringside armchairs for the president and the first lady, Melania, and the Japanese prime minister, Shinzō Abe, and his wife, Akie.

a mix of fans and protesters outside of the stadium where President Trump will attend a Sumo wrestling match tonight pic.twitter.com/4Bl226CB6K

Japanese police lead away an anti-Trump protester ahead of the president’s arrival at Ryōgoku Kokugikan stadium for the Sumo match pic.twitter.com/iLK7RAgn7O

PM Abe: President Trump and I watched sumo, a traditional sport in Japan. It was the first time for a sitting U.S. president to attend a sumo tournament. @POTUS handed wrestler Asanoyama a newly-created trophy, 🇺🇸 President’s Cup, as a great cheer rang through the stadium. pic.twitter.com/rGGXPiNXPL

Previous Ark Encounter: Stop Saying That We Were Flooded
Next Chuck Todd To Sanders: Why Is Trump Siding With A Murderous Dictator Over A Former US Vice President?