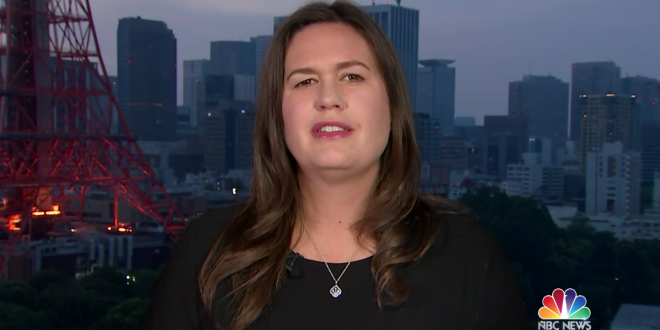 Chuck Todd To Sanders: Why Is Trump Siding With A Murderous Dictator Over A Former US Vice President?

From the transcript of this morning’s Meet The Press:

CHUCK TODD: Can you explain why Americans should not be concerned that the president of United States is essentially siding with a murderous authoritarian dictator over a former vice president in the United States?

SARAH SANDERS: Chuck, the president’s not siding with that. But I think they agree in their assessment of former Vice President Joe Biden. Again, the president’s focus in this process is the relationship he has and making sure we continue on the path towards denuclearization.

The president watched [Biden] and his administration with President Obama fail for eight years. He’s come in in two and a half, he’s cleaned up a lot of the messes that were left behind. We shouldn’t even be in the position that we’re in to have to deal with North Korea at the level we are if they had done their job in the first place.

North Korea fired off some small weapons, which disturbed some of my people, and others, but not me. I have confidence that Chairman Kim will keep his promise to me, & also smiled when he called Swampman Joe Biden a low IQ individual, & worse. Perhaps that’s sending me a signal?

WATCH: Does Trump expect Comey to be arrested? #MTP #IfitsSunday@PressSec: “The people that were responsible and that were part of this unprecedented obstruction and corruption at the F.B.I., those people should certainly be held responsible.” pic.twitter.com/Cgt1H77wag

WATCH: Has Trump already made a judgment call on the outcome of the Barr investigation? #MTP@presssec Sarah Sanders: “We already know about some wrongdoing. The president’s not wrong in that. But he wants to know everything that happened and how far and how wide it went.” pic.twitter.com/bWoVN8J6L9

“It’s not true to say nothing’s come of it. There have been steps that have moved us towards for a strong, a significant period of time there was no missile testing.” pic.twitter.com/B4pMfcIBFB