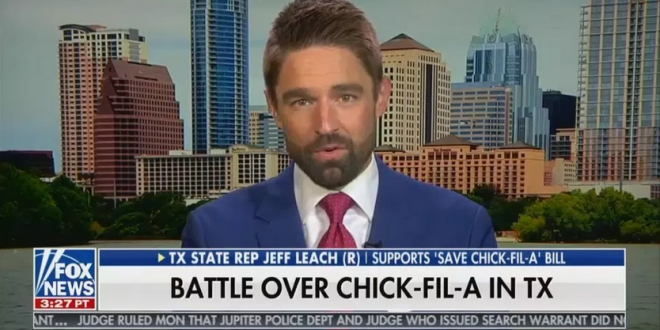 Texas GOP Rep: I Don’t Think You Should Be Able To Argue With The Groups Chick-Fil-A Supports [VIDEO]

Texas state Rep. Jeff Leach (R) said Tuesday that lawmakers had an obligation to ensure Chick-fil-A was able to have stores in every airport across the country.

“People love Chick-fil-A. You can’t argue with Chick-fil-A’s food and I don’t think you should be able to argue with the organizations that Chick-fil-A chooses to support either,” Leach said, speaking with Fox & Friends.

He continued, “It’s our obligation as policymakers, as lawmakers, is to protect that right of Chick-fil-A to do that and to protect their right to exist and to have an establishment in any airport, in any city, in any community across the country.”

In the video below, Leach lavishes praise on Chick-Fil-A for their “uniquely American” policy of closing on Sundays. “I love walking through an airport on a Sunday and seeing them closed.” Watch the Fox host quiver in agreement. Sundays, as you surely know, are usually the busiest day of the week for airports.