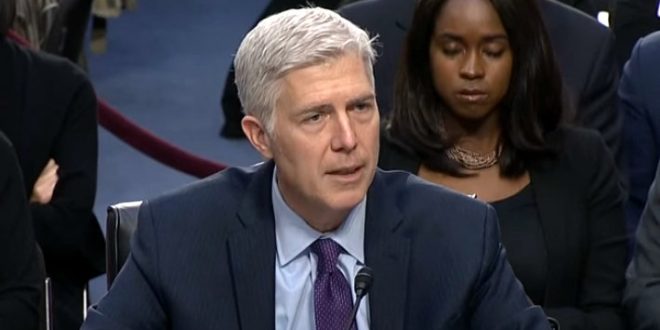 Supreme Court Justice Neil Gorsuch is taking on a new role as the honorary chairman of a nonpartisan group devoted to education about the Constitution, replacing former Vice President Joe Biden.

The National Constitution Center in Philadelphia said Tuesday that Gorsuch, named to the high court by President Donald Trump, will serve as a spokesman for civics education and civility in politics.

The 51-year-old Gorsuch is the first justice to be the center’s chairman. Biden stepped down when he launched his campaign for the presidency in April. Gorsuch said he’s concerned by polls that show most Americans would flunk a citizenship test and many say incivility keeps them away from public affairs.

.@ConstitutionCtr announced today that U.S. #SupremeCourt Justice Neil M. Gorsuch has been elected Honorary Chair of the Center’s Board of Trustees.

Previous Manhattan Trump Tower Units Now Selling At A Loss
Next Texas GOP Rep: I Don’t Think You Should Be Able To Argue With The Groups Chick-Fil-A Supports [VIDEO]