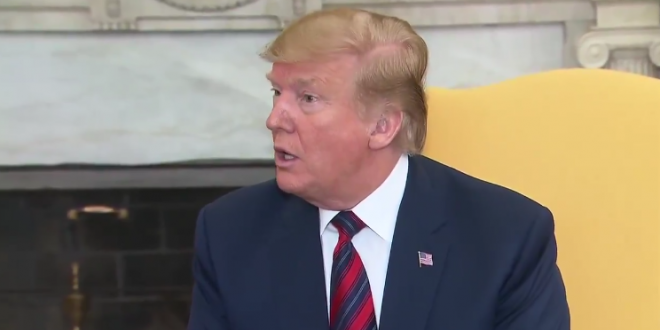 Trump Claims To “Know Nothing About Wikileaks”

President Trump on Thursday downplayed his knowledge of WikiLeaks after its founder, Julian Assange, was arrested in London. “I know nothing about WikiLeaks. It’s not my thing,” Trump told reporters in the Oval Office when asked if he still loves the organization.

Trump repeatedly professed his affinity for WikiLeaks during the 2016 campaign, when it published emails that were stolen from Democrats by Russian hackers. “I love WikiLeaks,” Trump said at an October 2016 rally in Pennsylvania.

“Getting off the plane, they were just announcing new WikiLeaks, and I wanted to stay there, but I didn’t want to keep you waiting,” he said two days before Election Day that year. “Boy, I love reading those WikiLeaks.”

President Trump, who often expressed his love of WikiLeaks during the 2016 presidential campaign, says following the arrest of Julian Assange on Thursday: “I know nothing about WikiLeaks. It’s not my thing.” pic.twitter.com/smT8o7La95

Trump just said he knows “nothing about” WikiLeaks after founder Julian Assange’s arrest.

But in 2016, the president used WikiLeaks’ disclosures to repeatedly bash Hillary Clinton during the campaign pic.twitter.com/KdBEgTOWZB

Trump just now: “I know nothing about Wikileaks. It’s not my thing.”

Trump Oct 2016: “This WikiLeaks is like a treasure trove,”

Previous National Enquirer In Talks For Sale To Clinton Ally
Next Alabama: End To Marriage Licenses Near Final Approval