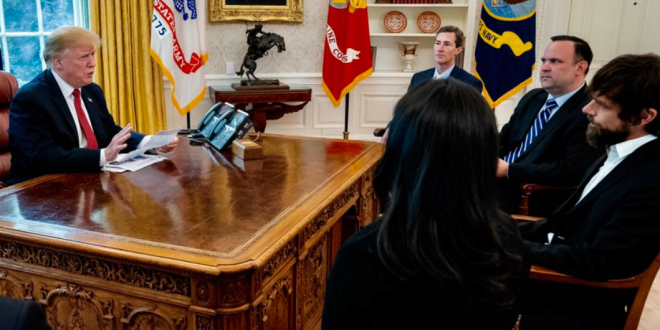 Shortly thereafter, Trump tweeted, “Lots of subjects discussed regarding their platform, and the world of social media in general. Look forward to keeping an open dialogue!”

The upbeat tone of Trump’s tweet represented a reversal of tone from the one he’d conveyed just hours before, on Tuesday morning, when he used his personal Twitter account criticize the tech giant.

“The best thing ever to happen to Twitter is Donald Trump.” @MariaBartiromo So true, but they don’t treat me well as a Republican. Very discriminatory, hard for people to sign on. Constantly taking people off list. Big complaints from many people. Different names-over 100 M…..

Great meeting this afternoon at the @WhiteHouse with @Jack from @Twitter. Lots of subjects discussed regarding their platform, and the world of social media in general. Look forward to keeping an open dialogue! pic.twitter.com/QnZi579eFb

did you call him Jack Twitter? did your eyes glaze over and did your mind drift to thoughts of Trump Tower Pyongyang while Jack tried to explain how algorithms work to you? he may well have tried to explain calculus to a monitor lizard, for all the good it did either of you