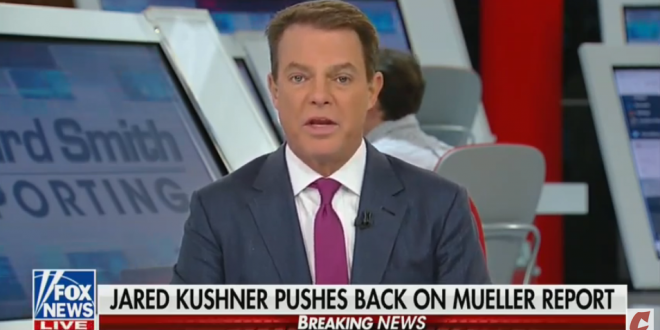 “Jared Kushner’s diminishment of Russian interference is both disingenuous and deceptive. The attack on our democracy involved much more than the purchase of a few Facebook ads. From the Mueller report we now know, Russians made contact with multiple members of the Trump campaign, including Jared Kushner, attempting to change American policies and promote Russian objectives.

“They invaded our nation, in both the cyber and physical worlds. The US indicted 26 Russian nationals and three Russian companies and the Mueller report makes crystal clear, and all U.S. intelligence agencies concur, the Russians still are trying to damage our nation, interfere in our affairs, and influence our elections.

“Mueller wrote while there’s evidence of communications with the Trump campaign and Moscow, there was no coordination. But on the matter of Russian interference, the Facebook ads Jared Kushner references were but a sliver of Russia’s attack on America.” – Fox News anchor Shepard Smith, on this afternoon’s show.