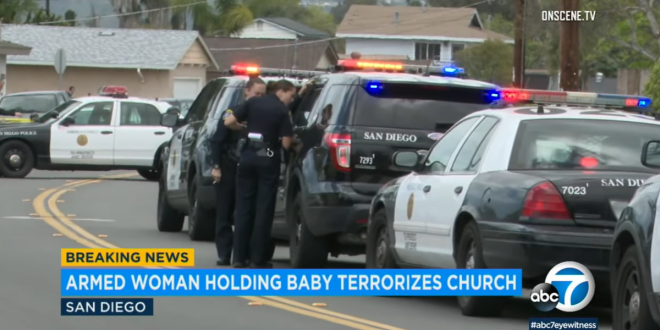 Parishioners and police tackled a woman who entered a Clairemont church service carrying a baby and a handgun on Easter Sunday.

Police first received calls about an armed woman at a church service hosted at Mt. Everest Academy, near the intersection of Balboa and Genessee avenues, around noon. Witnesses said the woman came up on stage through a back entrance, holding a gun in one hand and a young boy in the other.

Churchgoers said the woman was shouting incomprehensibly, making comments about “martyrs,” “the rapture” and blowing up the church. Members of the congregation eventually tackled the woman, police said, and officers arrived a short time later to take the woman into custody. Police identified her as 31-year-old Anna Conkey.

Conkey had sent NBC 7 an email five minutes before the incident. The email was sent as a news tip, not disclosing she was the suspect.

The email read: “There’s a woman claiming to be the Messiah, saying she was sent to blow up the foundation of the Church—she’s got a gun and a child is involved. The address is 4350 Mount Everest Blvd San Diego, CA 92117. There are about 70 people in the auditorium of the school where the church service is held”

On April 15, about a week before Anna Conkey showed up at Mount Everest Academy with a gun, she made a Facebook post talking about how God had appointed her to give the church a message. She said that she went to the church to deliver this message — but instead of listening, the church called the police and ordered her to leave.

Conkey said “I didn’t do anything. I guess when I said that God told me I’m his messenger, and an apostle, and a prophet, and according to the Bible, the apostle has more power than the teacher…I was sent there for a reason.”

Conkey is a freelance journalist who has worked for both NBC and KPBS. At NBC, where she worked from June 2017 to February 2018, she says she wrote news articles, published stories on the web, edited news stories, and edited video.