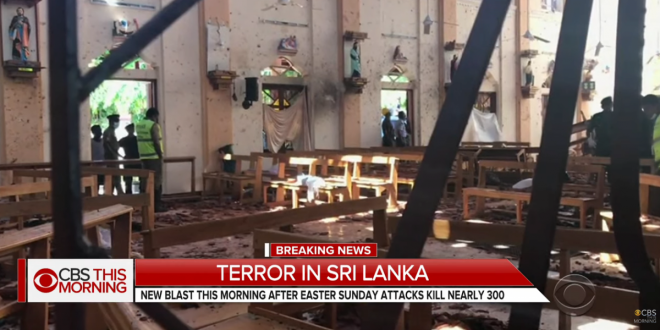 A wave of bombings that killed 290 people in Sri Lanka on Sunday was carried out with the support of an international network, officials say. The government has blamed a little-known local jihadist group, National Thowheed Jamath, although no-one has yet admitted carrying out the attacks.

Another 500 people were injured in the suicide attacks on churches and hotels. A nationwide emergency will be declared from midnight (19:30 GMT) on Monday, the president’s office has said. Police have arrested 24 people in a series of raids.

Addressing reports that officials had had prior intelligence of forthcoming attacks, Mr Wickremesinghe said: “We must look into why adequate precautions were not taken. Neither I nor the ministers were kept informed.” A top Sri Lankan official later told the BBC that the government and intelligence services should not be blamed.

The Sri Lankan government’s decision to block all social media sites in the wake of Sunday’s deadly attacks is emblematic of just how much US-based technology companies’ failure to rein in misinformation, extremism and incitement to violence has come to outweigh the claimed benefits of social media.

Sri Lanka’s government moved to block Facebook, WhatsApp and Instagram – all owned by Facebook – on Sunday out of concern that “false news reports … spreading through social media” could lead to violence.

The services will be suspended until investigations into the blasts that killed more than 200 people are concluded, the government said. Non-Facebook social media services including YouTube and Viber have also been suspended, but Facebook and WhatsApp are the dominant platforms in the country.

A day after hotels and churches were targeted in bombings in #SriLanka a broader picture is emerging of the massive and well-coordinated attack.https://t.co/me4jQL6MFK

Previous San Diego: Woman With Baby And Gun Rushes Church Stage, Rants About Rapture, Tackled By Congregants
Next Big Donors Who Snubbed Trump 2016 Are Now All In