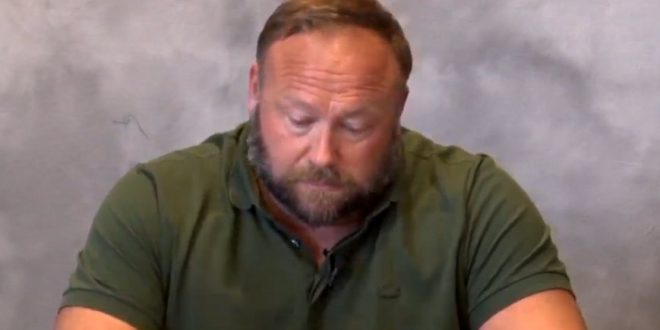 Infowars host Alex Jones was questioned earlier this month for three hours by the lawyer of a Sandy Hook parent who has accused him of perpetuating an abhorrent hoax. It did not go well for Jones.

“Like I told you, most of this stuff I can’t even remember,” Jones says about the 2012 Sandy Hook shooting at one point in a video deposition released to HuffPost.

The deposition, which was released publicly on Friday, shows Jones in the hot seat as he attempts to explain his reasoning for spending years falsely claiming that the school shooting in Newtown, Connecticut ― which left 20 children and six adults dead ― was a hoax.

The deposition and records are part of a defamation lawsuit against Mr. Jones brought by Scarlett Lewis, whose son Jesse Lewis died at Sandy Hook, moving forward in Texas.

The families of 10 Sandy Hook victims are suing Mr. Jones, Infowars, and associates such as Mr. Halbig in four separate lawsuits, one in Connecticut brought by eight victims’ families and a first responder, and three in Texas brought by the parents of two more victims.

In the videotaped deposition, conducted this month, Mr. Jones says under oath that his sources for reports aired on Infowars include conspiracy theorists like Mr. Halbig, random emailers and anonymous users on the chat room 4chan. Mr. Jones claims the same First Amendment protection provided traditional news media for his false claims.

Previous AG Says Congress To Get Mueller Report In Mid-April
Next UTAH: Arrest Warrant Issued For Man In Viral Anti-Gay Assault After He Fails To Appear For Court [VIDEO]