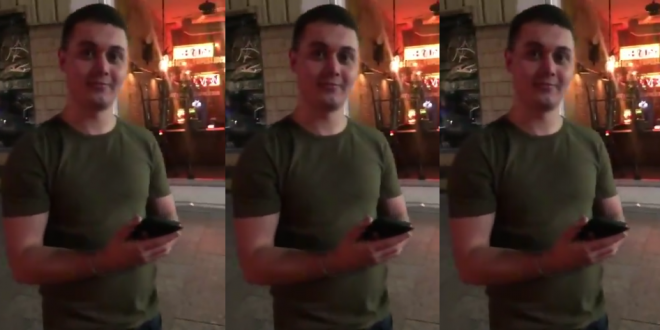 UTAH: Arrest Warrant Issued For Man In Viral Anti-Gay Assault After He Fails To Appear For Court [VIDEO]

The Florida man who was caught on video asking a Utah man if he is gay and then punching him failed to show up for a court date on Friday, and a warrant was issued for his arrest.

Carlo Alazo, 22, faces three misdemeanors — one count of threatening to use a weapon in a fight and two counts of assault. Now he’s facing a $2,500 warrant for failure to appear at a scheduled 3rd District Court date on Friday.

An 8-second video of the incident in the early-morning hours of Feb. 17 went viral when the victim, Sal Trejo, posted it on Twitter. The video shows Alazo approaching Trejo and asking, “Are you gay, though?” Trejo replies, “Oh, I am.” “Oh, then you are gay,” Alazo says, and then he appears to hit Trejo.

According to above-linked report, Alazo claims he wrote the court asking for a 90-day continuance because he lives in Tampa. The court, obviously, wasn’t buying it.

My friends and I were assaulted by this homophobic man in downtown Salt Lake City last night. Anyone know him? The police are interested in having a chat with him. #SaltLakeCity @slcpd @slcmayor @EqualityUtah pic.twitter.com/1tPFSCADOp