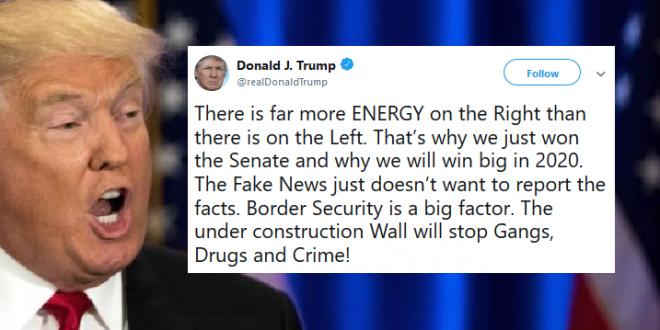 President Donald Trump attacked the “Fake News’ yet again today in a tweet touting how mobilized Republicans are leading into 2020. Republicans, of course, held onto the Senate in the midterms but lost the House. Earlier this week Trump used the “ENEMY OF THE PEOPLE” line again, targeting The New York Times. The paper’s publisher fired back saying such rhetoric is dangerous.

There is far more ENERGY on the Right than there is on the Left. That’s why we just won the Senate and why we will win big in 2020. The Fake News just doesn’t want to report the facts. Border Security is a big factor. The under construction Wall will stop Gangs, Drugs and Crime!

Previous VENEZUELA: Troops Fire Tear Gas As People Try To Clear Barricaded Bridge For Humanitarian Aid Trucks
Next Mueller Issues Sentencing Memo For Paul Manafort: He Is A “Hardened, Bold Criminal” And Lied To Everybody