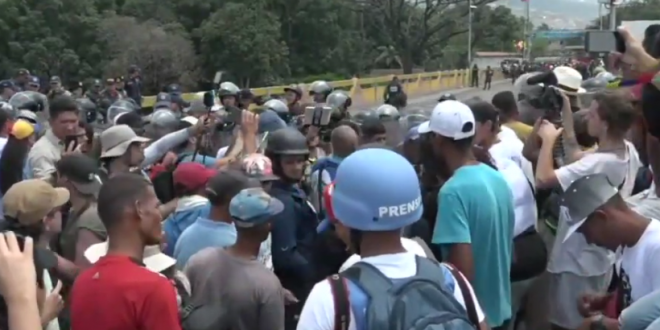 Venezuela’s National Guard fired tear gas on residents clearing a barricaded border bridge to Colombia on Saturday, as the opposition began making good on its high-risk plan to deliver humanitarian aid to Venezuela despite objections from President Nicolas Maduro.

By midday, opposition leader Juan Guaido pulled himself onto a semi-truck and shook hands with its driver as he and Colombian President Ivan Duque gave a ceremonial send off to an aid convoy looking to transport nearly 200 metric tons of mostly U.S.-supplied emergency food and medical supplies from the Colombian city of Cucuta.

“Our call to the armed forces couldn’t be clearer: put yourself on the right side of history,” said Guaido, in an appeal to troops who constitute Maduro’s last-remaining major plank of support in a country ravaged by hyperinflation and widespread shortages.

For days, the humanitarian aid has been stockpiled on the Colombian side of the border with Venezuela, warehoused near a bridge in the major border town of Cúcuta. The Venezuelan authorities have blocked lanes on the bridge with tanker trucks to prevent the aid from being brought across. Two competing concerts have added to the dramatic scene.

On Friday morning, thousands of Venezuelans streamed across footbridges to Cúcuta, to attend the opposition-supported Venezuela Live Aid concert organized by the billionaire Richard Branson. The event was aimed at raising money for food and medical supplies.

The presidents of Colombia, Chile and Paraguay attended the concert, rallying support for the opposition and calling for an end to Mr. Maduro’s presidency.