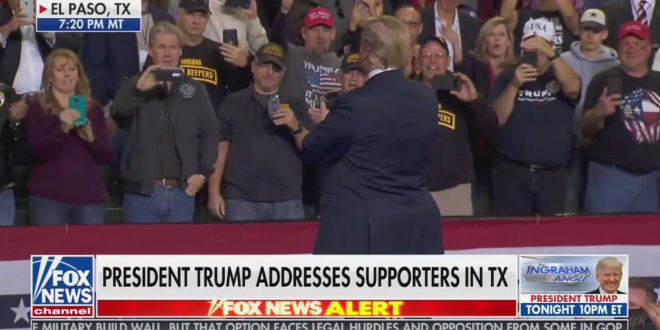 Oath Keepers founder Stewart Rhodes and members of his far-right armed militia were spotted in the front row at President Donald Trump’s February 11 rally in El Paso, TX. Rhodes has advocated for training armed militias to do Trump’s bidding, embraced white supremacist conspiracy theories, endorsed using “lethal force” against left-wing protesters, and called on armed Oath Keepers to stand guard outside of schools and to spot unauthorized crossings at the U.S. southern border.

Rhodes founded Oath Keepers “in the direct aftermath of the election of the nation’s first black president,” Barack Obama, in reaction to the baseless claim that the federal government was hellbent on destroying liberties protected by the Constitution. The militia holds radical anti-government beliefs and is made up of “current and formerly serving military, police, and first responders” claiming to uphold the oath they made to “support and defend the Constitution.”

According to the Southern Poverty Law Center, the Oath Keepers are affiliated with the white supremacy movement. Both the SPLC and the Anti-Defamation League classify the Oath Keepers as extremists “fueled by a wild set of conspiracy theories.”

Stewart Rhodes, leader of the antigovernment group the Oath Keepers, is in the front row for Trump’s rally tonight in El Paso. (Rhodes is the one with the eye patch and ball cap.) pic.twitter.com/MO0cRcOz24

The @splcenter‘s extremist profile on Stewart Rhodes can be found here. https://t.co/AbuRo28H0T

PREVIOUSLY ON JMG: Stewart Rhodes vows to battle Antifa members in the streets outside Michael Flynn’s sentencing hearing. Stewart Rhodes declares that America would now be in a “full-fledged civil war” if Hillary Clinton had been elected. Armed Oath Keepers prowl the streets of Ferguson, Missouri to “help” local police quell civil unrest. Oath Keepers offer to protect Kim Davis from being rearrested by Kentucky police.

Previous CALIFORNIA: Governor Pulls Plug On LA-SF Bullet Train
Next White House: President Trump Condemns All Acts Of Violence, “Including Against Members Of The Press”