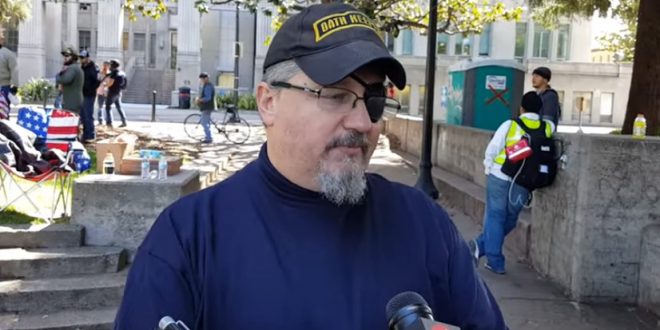 “Christian Militia” Founder Stewart Rhodes: If Hillary Clinton Had Won, America Would Now Be In A Civil War

“If you’re feeling a bit pessimistic today, just imagine what this 4th of July would be like if Hillary Clinton had ‘won’ the election – if all her election fraud and 5.7 million illegal alien votes had been enough to nullify the tidal waive of discontent that Trump rode to the White House. Thankfully, it was not, or you’d likely already be in combat, yet again, you old Devil Dog, but this time on American soil. So rejoice! It could be a whole lot worse.

“We truly dodged a bullet with the defeat of Hillary Clinton (whom I dubbed ‘Hitlery’ back in 2008 for very good reason). We now have a brief respite (sometimes it feels like a temporary stay of execution), in which to work our butts off to secure the blessings of liberty for our posterity before she, or someone worse, has another shot at the ‘throne’ of the imperial presidency with all its grossly expanded power.

“But despite our misgivings and concern for the future of our nation, we really should see today as a day of celebration and thanks to God for what we have been given – what was won for us by the blood, sweat, and tears of millions of Americans who came before us.” – Oath Keepers founder Stewart Rhodes, in yesterday’s message to his “Christian militia.”

Previous London Mayor: I Almost Wore This To Pride Last Year
Next Trump Elects To Recite Rules For Electoral College In US History Documentary Because Of Course [VIDEO]