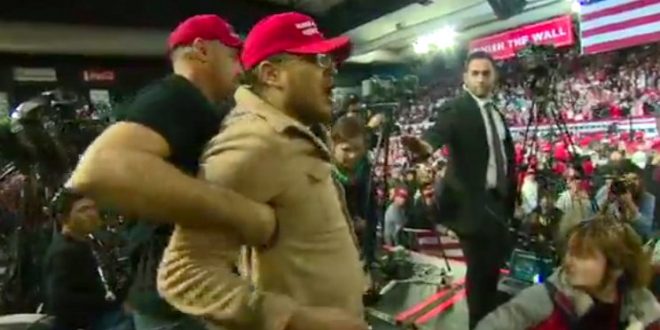 White House: President Trump Condemns All Acts Of Violence, “Including Against Members Of The Press”

“President Trump condemns all acts of violence against any individual or group of people — including members of the press. We ask that anyone attending an event do so in a peaceful and respectful manner.” – Sarah Sanders.

The El Paso District Attorney’s office will not press charges against the belligerent Trump supporter who apparently shoved several news crews and “violently pushed” a BBC cameraman during the president’s Monday evening rally near the border.

“We are looking into the situation and the released video of the incident but we are not pressing charges at this time,” District Attorney Jaime Esparza told The Daily Beast on Tuesday. “If there are any changes to our course of action, we will inform the public.”

The BBC has requested a White House review of security arrangements at Donald Trump rallies following an incident in El Paso last night in which a BBC camera operator was shoved hard enough to capture the president’s attention from the stage.

Michael Glassner, the chief operating officer for Trump’s campaign team Trump for President, said in a statement, “An individual involved in a physical altercation with a news cameraman was removed from last night’s rally. We appreciate the swift action from venue security and law enforcement officers.”

White House reporters are calling for a direct response from Trump. “The White House Correspondents’ Association condemns the physical attack on our colleague at the president’s rally in El Paso, Texas,” said WHCA president Olivier Knox in a statement. “We are relieved that, this time, no one was seriously hurt. The president of the United States should make absolutely clear to his supporters that violence against reporters is unacceptable.”

Just attended my first ⁦@realDonaldTrump⁩ rally where my colleague BBC cameraman Rob Skeans was attacked by a Trump supporter. The crowd had been whipped up into a frenzy against the media by Trump and other speakers all night #TrumpElPaso pic.twitter.com/Oiw8osPms3