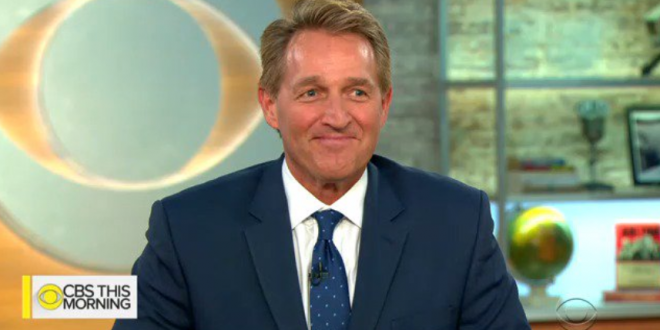 Former Sen. Jeff Flake has landed as a CBS News contributor and announced on air on Tuesday that he will not run for president in 2020. Flake was spotted at the network’s New York City headquarters on Jan. 4 amid talks for a role, The Hollywood Reporter reported at the time.

That role was formally announced on CBS This Morning on Tuesday during a segment about his future ambitions. A moderate Republican who left his U.S. Senate seat earlier this month, Flake was considered a potential Republican challenger to President Trump in 2020.

“I’ve always said that I do hope there is a Republican who challenges President Trump,” he said. “That will not be me.”

Shocked that Jeff flake who wouldn’t have come close to winning his home district isn’t going to run for president.

I thought he was a real contender🙄

You thought about running in 2020. Are you going to run?

“I have always said that I do hope that there is a Republican who challenges the president in the primary. I still hope that somebody does, but that somebody won’t be me. I will not be a candidate.” — @JeffFlake pic.twitter.com/YX1LtXzEBX