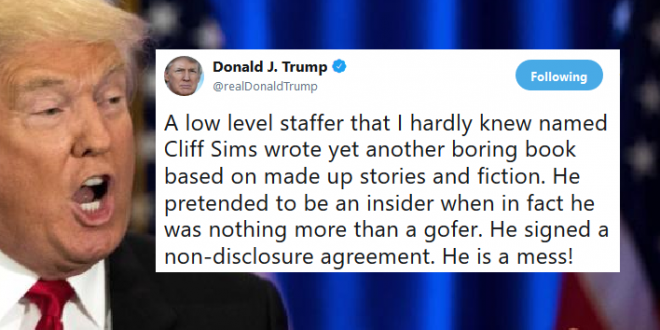 This morning Glorious Leader was clearly watching CNN – which he “never” watches – as former aide Cliff Sims continued to promote his tell-all, Team Of Vipers, which is out today.

CNN’s host broke from the interview near the end to read Trump’s tweet to Sims, much to his apparent delight. Sims says he doesn’t mind being a called a “gofer” because “I know who Jesus says I am.” For real.

And just now Trump campaign CEO Michael Glassner tweeted that they will sue Sims for violating his non-disclosure agreement.

The Trump campaign is preparing to file suit against Cliff Sims for violating our NDA. https://t.co/Xl1N95fPkH