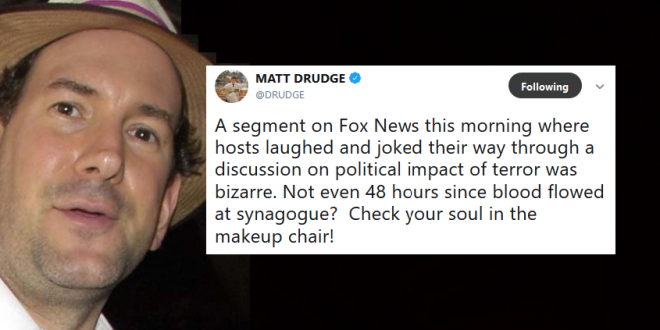 Matt Drudge on Monday morning seemingly broke rank among conservative media titans and openly bashed Fox News for its coverage of recent political violence in America. Drudge, the host of the news aggregator The Drudge Report, posted a series of tweets on Monday specifically criticizing a segment on Fox’s daytime gabfest Outnumbered that sought to discuss how the violent attacks will impact midterm voters.

In a statement, Fox News responded to Drudge: “Kennedy made an unrelated quip at the end of the segment which was focused on unity – there was absolutely no joking or laughing about the events of this weekend and a screen grab of her smiling is hardly indicative of the entire segment. The lower third should not have been up for the duration of this segment as it was not fully reflective of what the panelists were discussing.”

A segment on Fox News this morning where hosts laughed and joked their way through a discussion on political impact of terror was bizarre. Not even 48 hours since blood flowed at synagogue? Check your soul in the makeup chair!

Is it really funny? pic.twitter.com/nq8xnT2YDe