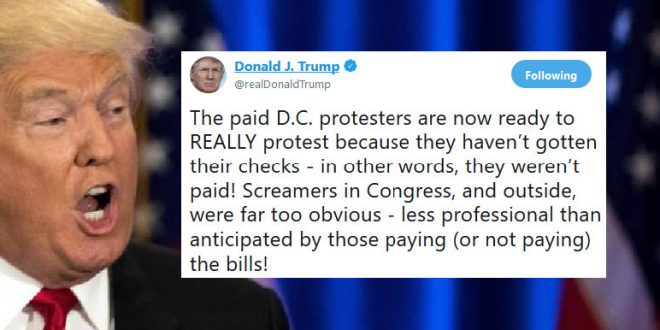 There’s nothing worse than waiting 7-10 business days for your check from George Soros to arrive. President Trump on Tuesday continued to push his conspiracy theory that people protesting Supreme Court Justice Brett Kavanaugh were paid professionals, this time asserting that those funding the protests haven’t paid the demonstrators yet. Shortly before his tweet, points out Media Matters‘ Matthew Gertz, a guest on Trump’s favorite Fox News show claimed that protesters “are waiting for their checks.”

The paid D.C. protesters are now ready to REALLY protest because they haven’t gotten their checks – in other words, they weren’t paid! Screamers in Congress, and outside, were far too obvious – less professional than anticipated by those paying (or not paying) the bills!

Asra Nomani: “People have sent me lots of messages that they are waiting for their checks.”