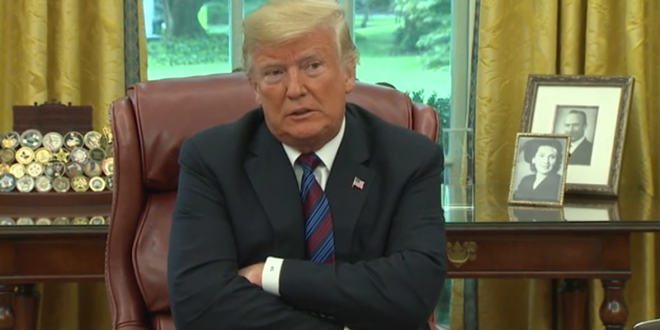 President Donald Trump says he’ll be “terminating” the North American Free Trade Agreement as he pursues a deal with Mexico and starts negotiations with Canada. Trump said Monday during an Oval Office event that he’ll be calling the emerging agreement the “United States-Mexico Trade Agreement.” He says it will mark the end of the NAFTA name. Mexican President Enrique Peña Nieto was on speakerphone and says he hopes NAFTA partner Canada will eventually be incorporated into the deal.

The surprising scenes of Trump and the Mexican president congratulating each other in front of news cameras on successful bilateral negotiations that left Canada out appeared designed, in part, to pressure Canada. Peña Nieto wrote on Twitter that he has spoken with Canadian Prime Minister Justin Trudeau and expressed the “importance of re-joining the process, with the goal of concluding the trilateral negotiation this week.”

Trump is threatening to put tariffs on US cars that are assembled in Canada, as the president has no idea how trade and tariffs work. https://t.co/EipXt18GBF pic.twitter.com/noU839y32s

Trump threatens Canada: “The easiest thing we can do is tariff their cars coming in…it’s a very simple negotiation, it could end in one day.”