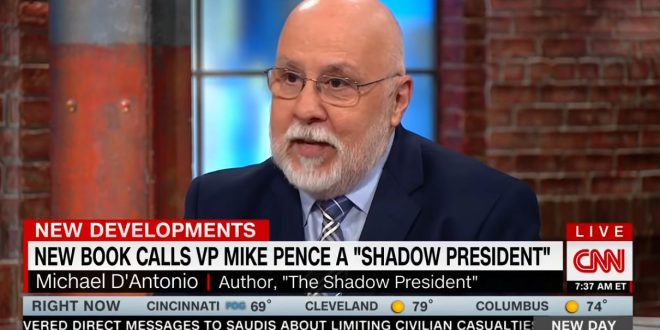 Biographer: Mike Pence Believes God Is Calling On Him To Function As The “President-In-Waiting” [VIDEO]

Michael D’Antonio, a CNN contributor and biographer who wrote “The Truth About Trump,” said in a new interview that Vice President Mike Pence believes God is “calling him” to “function as a president-in-waiting.”

“Absolutely everything Mike Pence does is oriented toward him becoming president,” D’Antonio said during an appearance on CNN on Tuesday in promotion of his new book, “The Shadow President: The Truth About Mike Pence.”

“His decision to accept Donald Trump’s offer to be his running mate — it even goes back much further,” D’Antonio claimed. “By the time he had left high school, he had decided that he was going to be president of the United States. He thought God was calling him to, now, be vice president and function as a president-in-waiting.”

Should you have forgotten, Pence is only vice president because Paul Manafort faked a problem with Trump’s plane so that the two would be in the same city for a dinner that night. Trump had been leaning towards Chris Christie.