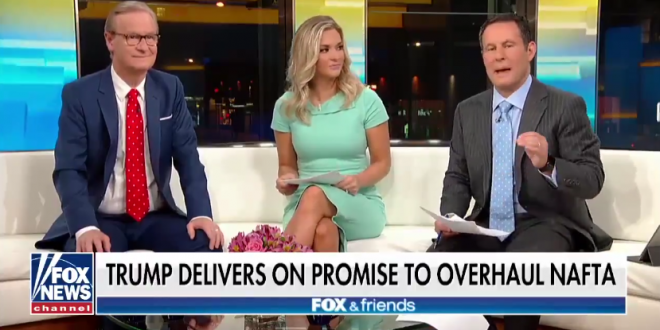 “For those people who think the president is anti-Hispanic, or doesn’t like Mexicans, or doesn’t respect Mexico, oops. What did he just do now? Forget about Canada, let’s focus on Mexico. President Nieto engineered it, the socialist new guy was all for it, together he already put together a three-way deal between two, one incoming, one outgoing governments. So far that’s a stunner and a success story. I cannot wait to see what Canada comes to the table with.” – Fox & Friends host Brian Kilmeade.

Previous Biographer: Mike Pence Believes God Is Calling On Him To Function As The “President-In-Waiting” [VIDEO]
Next Russia To Hold Largest War Games Exercise In Decades