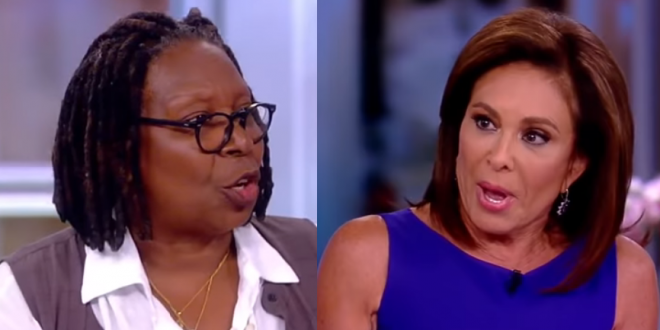 We bet this detail doesn’t make it into her Fox show.

Whoopi Goldberg’s F-bombs weren’t the only expletives thrown around backstage at “The View” following a heated on-air exchange with Jeanine Pirro. Sources add that in front of the audience, Pirro “ripped off her microphone and threw it at one of the guys on the crew and said, ‘Those cocksuckers!’” about the panel.

“It was a jaw-dropping moment,” said an insider. Goldberg alluded to the incident on Friday’s show, saying on-air, “she called everybody at the table a name I cannot repeat on TV and said it in front of the audience.”

A source told Page Six that the tension began when Pirro arrived at the show to learn that anti-Trump CNN contributor Ana Navarro was there to fill in for Joy Behar and felt that “the segment was being hijacked.”

Previous REPORT: Eric Holder 2020 Bid Appears More Likely
Next Roseanne: My Show Got Canceled Because I Voted For Trump And That’s Not Allowed In Hollywood [VIDEO]