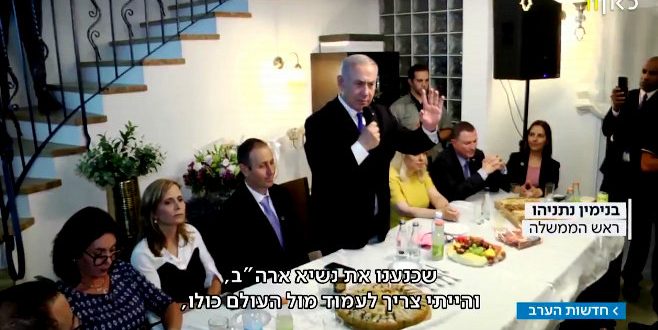 In a video clip aired by Israeli television, Prime Minister Benjamin Netanyahu boasted that Israel was responsible for US President Donald Trump’s decision to quit the Iran nuclear deal. In the video, which the Kan public broadcaster said was filmed two weeks ago, Netanyahu can be seen speaking to activists and senior members from his Likud party.

“We convinced the US president [to exit the deal] and I had to stand up against the whole world and come out against this agreement,” Netanyahu says in the video. “And we didn’t give up.”

The prime minister then begins to speak about the Iranian regime — “not the Iranian people, I have nothing against them” — before he is interrupted by an unidentified person off-screen who says, “It will disappear with the help of God.” “You said it. From your mouth to God,” Netanyahu says in response as the clip ends.