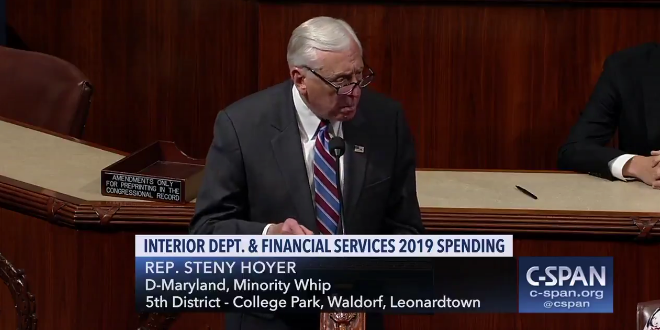 They began chanting “USA, USA, USA”– but it wasn’t a Trump rally. House Democrats on Thursday erupted into the chants on the floor of the House of Representatives after House Minority Whip Steny Hoyer, D-Md., delivered a fiery speech condemning Russian President Vladimir Putin for election meddling and accusing Republicans of not doing enough to ensure security of future elections.

“Surely, we can rise above pandering to party and Putin to act on behalf of our freedom and our security,” Hoyer said to applause from Democrats, over the bangs of the gavel as the House was called to order by the speaker. Democrats then began chanting. Republicans didn’t join in.

It came as the House moved forward with a spending bill that eliminates new funding for election security grants to states, amid protests by Democrats who say Republicans are not doing enough to prevent Russian meddling in U.S. elections.

Members of Congress have sworn an oath to defend our Constitution and our liberty against all enemies foreign and domestic. Today, Republicans had an opportunity to vote with Democrats to do just that – to defend America – and chose not to. pic.twitter.com/M5X8YnQ884

REMINDER: @HouseGOP has proposed zeroing out funding for election security grants that help states fortify & protect their election systems against cyber-hacking. @HouseDemocrats are fighting to restore this funding and #ProtectOurDemocracy. https://t.co/ghIG0QOuXs

JUST IN: @HouseGOP sided with @POTUS and voted down @RepMikeQuigley‘s effort to restore election security grants that prevent hostile powers like Russia from hacking our elections. #ProtectOurDemocracy pic.twitter.com/gvEJ4j3ejG