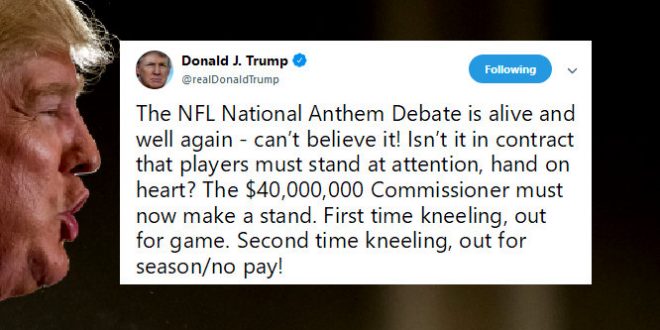 After a week of the most relentlessly negative press since he declined to denounce Nazis, Glorious Leader this afternoon tried to throw a lifeline to himself and his base with yet another attack on black NFL players, who he now says should be suspended for the season without pay if they dare to protest against police brutality during the national anthem. But only after the second time they do so, apparently.

Trump has previously called protesting players “sons of bitches” who should be fired. Today’s tweet comes hours after the NFL came to an agreement with the players union, suspending for the time being its new anthem policy. That policy was put on ice, for now, after the Miami Dolphins announced that players would be suspended or fined for kneeling during the anthem.